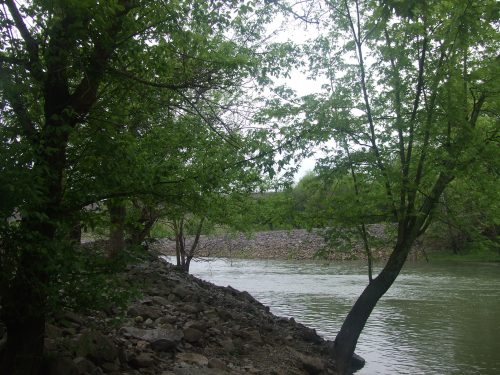 green river, campbellsville, ky. i took this myself!

you may have noticed the lack of updates lately.  that’s because i travelled back to my old kentucky home for my 5 year college reunion and for my birthday.

i saw lots of family while i was at home, including my big brother and my neice, his 16 year old daughter, who is like, one of my favoritest people in the world.  my brother is often on some conspiracy theory shit.  while i was there he kept callin the swine flu, which is officially named the H1N1 virus, ‘hispanic one/nigga one.’  lol.  i know right?  completely ridiculous.  i said the same thing when he said it.

but then we figured it all out.  went like this:

me:  what are u even talkin about right now?

me:  so this is a government plot?  to kill the blacks and hispanics around the world?

niece:  it started in mexico; why would mexico want to kill their own people?

niece:  maybe it’s somethin else then?

me:  like what?  it got here from a baby in mexico who crossed the boarder.  omg.. that’s it!

me:  this could be a plot to get americans to agree to close down the boarder to mexico!  if they keep bringin swine flu over here, nobody’s gon want em!

bro:  yeah!  and when it gets over here and gets into black people, its just gon kill em all.  you know we 10 times more likely to die from diseases than white people are.

that’s it yo!!  we’ve solved it!  i mean there HAS to be somethin behind all this assenine sensationalism, ppl walkin round with masks on because of the flu.  and that’s all it is.  its just THE FLU.  but they gubment got yall scared, see, cause that’s how they control the minds of the people.  with fear.  see, they get u scared of this flu, tie it to some brown people, and bam.  skinhead membership is up through the roof.

and dont think america is above shit like this!  yall remember operation northwoods?  i rest my case!

This entry was posted in Uncategorized. Bookmark the permalink.

3 responses to “the swine flu conspiracy”