soooo the VMAs were last night.

soooooo.  MTV’s Video Music Awards wrapped about 30 minutes ago, and unless you’re living under a rock or are otherwise not well-versed in Internet, you’ve probably heard about all the controversies.  Kanye’s new storming of the stage and the hissyfit he brought with him.  Lady Gaga’s torso having it’s period in the middle of her performance.  Pink goin’ Cirque du Soleil on all you bastards.  since those big events are all the buzz, i won’t spend too much time on them.  i do wanna say a little somethin about the show tho.  overall, it actually didn’t suck.  i didn’t walk away from it feeling that i had totally wasted 5 hours of my life that i will never get back.  that’s typically my feeling after this little shindig.  and after each BET Award show.  and the Source Awards (lmao.  remember when the Source had an award show?  lol.  horrible idea).  it was actually a fairly good show… it held my attention beginning to end thanks to the MJ tribute in the beginning and all the stuff that wasn’t supposed to happen/no one expected thereafter.  these, in my opinion, were (some of) the highlights of the evening for me:

-Kanye won’t let himself be great. yeah, he threw another bitchfit, and really, i won’t say too much about it cause i know everybody else is covering that.  i do want to say, though, that it was absolutely positively hilarious.  at first i thought it was scripted, like there is no possible plausible way that this grown ass man is STILL on this ‘gimmie gimmie gimmie its not fair’ tantrum shit.  the crazy thing about this time was that he wasn’t even nominated for the award he was cryin about!  he’s up there displaying his menses all over the stage over somebody ELSE’S award!  lol come on, now!  yeah, it was funny, but truthfully?  i’m over that whole spiel.  it’s old.  i thought Kanye was too, turned over a new leaf and whatnot.  am i imagining that?  didn’t he say he wasn’t on that shit no more?  i mean not only did he act an ass, but he pretty much told Taylor she didn’t deserve her award, and let me just say that while i’m not a huge fan of her music, i’m a BIG fan of her as a creative talent and business woman.  she’s been grindin hard since she was like 14.  amazing.  so yeah, he’s on stage nearly literally taking candy from a baby.  lmao.  oh, and then there was this piss poor apology that pretty much amounts to “i’m sorry you were offended,’ which, as we all know, ain’t a damn apology at all.  at any rate, between he and Serena, i think we’ve reached our Public Black Rage quota for the rest of the year.  this means that Whoopi and Sherri aren’t allowed to raise their clucking above a whisper the rest of the season of The View.  wait… he may have actually done us a favor there.

i wont front though.  it was REALLY funny, and my favorite part was when Kanye helplessly shrugs his shoulders at the end, like ‘what?  what ‘chu want me to do?’  LOL.

-MJ tribute! aaaahh!  i love Janet!  and i love Michael!  and i love MJ tributes (when they’re decent)!  Janet opened the show with a much talked about tribute to her brother, and i don’t know what i was expecting.  what i got wasn’t what i was expecting though.  i think that after BET’s *ahem* tribute, i thought there would be… more?  i dunno.  i found the tribute very, very cool though.. really succinct, tasteful and well-encompassing.  i thought that having a bunch of dancers (did yall peep Laurie Ann Gibson on stage gettin it in?) doing Michael’s moves as he sort of did his thing above them was kind of poetic-like.  and i almost teared up when Janet danced with him.  sigh.  those poor people.  and how fitting is it that ‘Scream’s subject matter just happens to be the perfect message (‘stop fucking with me/us) that i’m sure she wants to send to everybody.  she was singin that joint HARD too (lipping and otherwise).  good show.  and i found Madonna’s words to be really touching, actually.. very, very honest and kind of haunting but beautiful nontheless.  and she didn’t look like an alien as she usually does.  good show all around.

my favorite part, i think, was when the ‘smooth criminal’ dancer couldn’t quite gangster lean like the rest of them (see opening pic). LOL.

-Lady Gaga doesn’t suck, but her tampon suit sure did. okay.  i have this thing about myself where if there’s a current trend or fad or singer that everybody really 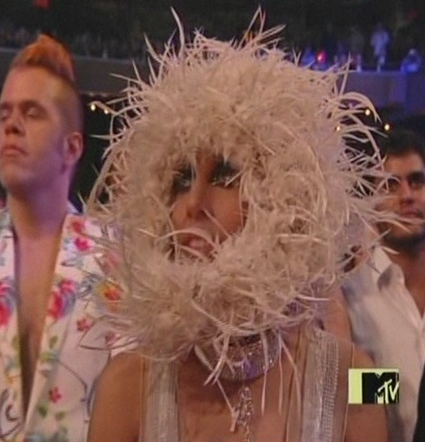 really likes, i’ll refuse to like it just off general purpose.  i’m stubborn.  i’d blame it on me being a Taurus, but i’m not into astrology because everybody else is.  and because i think it’s worthless psychobabble mumbo jumbo, but that’s a weave of a different color.  so yeah.  Lady Gaga’s music has been everywhere, and as a result i’ve pretty much been everywhere that it hasn’t.  but you know what?  watchin her batshit crazy ass roll around bleeding on that stage today, i was like hey… she actually has a nice voice!   who knew!?  everybody did, apparently.  she sounded good.  looked like a walking piece of Dadaist art (my least favorite was the huge used tampon costume she put on.. why does she insist on lookin like an extra from Pan’s Labyrinth?), but sounded good.

speaking of the used tampon costume, i love this picture a little more than i probably should.  Em lookin at her like ‘OOOOH, GIRL ARE YOU ALRIGHT??  YOU SURE??!  SHOULD I CALL SOMEBODY?!’  lol.

–Green Day gives security the middle finger; Lil Mama searches for validation and acceptance. the evening was full of people not giving a fuck about security measures.  we saw it when Kanye did what he did, saw it again when Bow Wow Lil’ Daddy Lil Mama bum rushed the stage at the end of the evening.  somewhere in between all that, Green Day just said ‘fuck it, everybody on stage!’ and nearly killed a girl trying to pull her up.  i freakin love Green Day.  they really speak to my love of emo boys in guyliner.  also the performance was just waaay way hype.  going to a Green Day show is on my list of things to do in the future, second only to learning the ‘Thriller’ dance and finding out what the hell Lil Mama jumped on the stage for.  wtf?  did she just need a friend?  wanted to feel important?  aww, boo.  sit down, take a nap, and wake up with some home training.

-Jack Black has Aaron Neville arms! LOL!  this was one of my favorite parts of the whole show!!  either no one else remembered when i tweeted it, or no one else thought it was funny, but i freaking DIED.  do yall remembered when Horatio Sanz was on SNL and he used to spoof Aaron Neville and wore those ridiculous huge ass arms??  that’s what Jack Black looked like!  i couldn’t even focus on what his purpose was.. likely promoting a movie what i will likely most definitely see.. but i just couldn’t get past the arms.  if he would have been on stage rubbing them with cocoa butter i would have suffocated under the weight of my laughter.

so yeah.  overall, cool show.  im not mad i watched it.  you can see all the performances online at mtv.com…they’re probably not gonna allow anything up at myspace.  thanks to everybody who joined my little live tweet today!  photo credits below!

This entry was posted in entertainment, music, wtf. Bookmark the permalink.

3 responses to “soooo the VMAs were last night.”