the fattest thing i ever ate: a review.

if you are well versed in internets, you know about the bacon obsession swimming around the foodie world.  if there’s any random product, edible or otherwise, that  you’d like to see injected with bacon, somebody in the internets has probably had the same thought, and made it happen.  bacon salt.  bacon mayonnaise.  bacon mints.  bacon in a bottle.  bacon envelopes. bacon bra.   you dream it, it’s probably out there.

i was perusing the aisles of my favorite snazzy wine spot the other day  and was looking at all the bourgie artisan snacks and treats they also carry.  they specialize in dry meats (*snicker*) and stinky cheese.  i have little interest in either.  i DO have an interest in chocolate though.  i also have an interest in bacon.  my mind was sort of blown when i saw this: 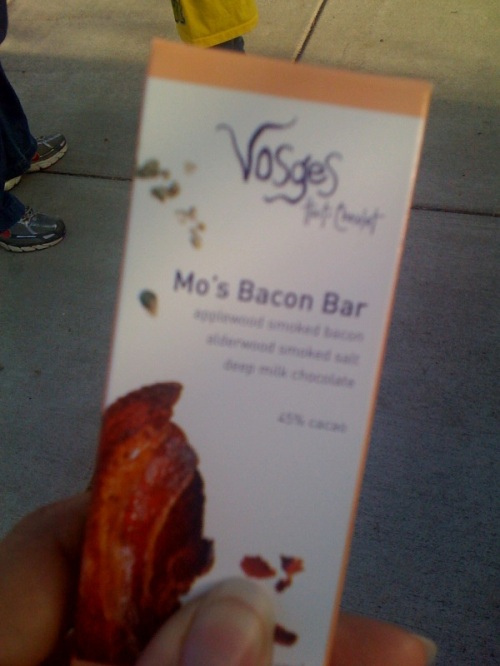 in case my crappy little camera phone pic is a little too crappy, here’s a better look at what that is.  that, my friend, is a bar of chocolate covered bacon.  or more accurately, it’s a chocolate candy bar with bits of bacon in it.  id seen it before.  we had a rather unsettling encounter a couple of weeks before.  i walked up to itand gazed at it longingly before whispering no… no, this is wrong! it looked back at me and said, i don’t care what other people think!  you want me, and that’s all that matters!  take me!  take me now!!! i clutched my pearls, tore myself away and ran out the door.

but this last time, i gave in.  they had big bars and little bars.  the little bars were $2 which is a LOT of money for two little squares of chocolate.  if the small bar was $2, i didn’t even wanna KNOW how much the full bar was.  i happened to have $2 in my pocket and i was feeling very devil-may-careish that day.  so the devil won.  i bought that bar.

now it’s common fact that chocolate + salty snack = delicious.  kind of like chocolate covered pretzels.  or milk duds and movie theater popcorn (i dont like movie theater popcorn, but with milk duds, it’s delicious!).  so when i felt the first tremor of delight in my mouth as the salty-smokiness of the bacon tangoed with the chocolate on my tongue, i didn’t trip.  because it made sense.  it was good.

but as i kept chewing my bite,  i looked around the room and the world just didn’t look the same anymore.  everything just felt wrong.  colors weren’t quite as bright as they were before, and i think i saw an evil clown briefly hiding behind the curtain.  the problem came when the chocolate was gone.  see, bacon is a lot chewier than chocolate is, so after the chocolate had been swallowed, i was still chewing little bits of bacon, and that’s when the guilt set in.  i was just left with a mouth full of bacon bits and the realization of what i had just done.  somebody had taken some bacon, which is a pretty fat food, and covered it with ANOTHER fat food and i had eaten it. i had just eaten a heart attack!  and liked it!!!

by the time i had swallowed my share i became conscious again of the other people in house.  the man in the room was, literally, very literally, curled up on the couch in a fetal position.  im totally not joking.  chocolate covered bacon brought an ex-army guy to his knees.

so in conclusion, this bacon chocolate bar was troubling.  my tongue and tummy were happy, but my soul and spirit could only taste the guilt.  😦

8 responses to “the fattest thing i ever ate: a review.”